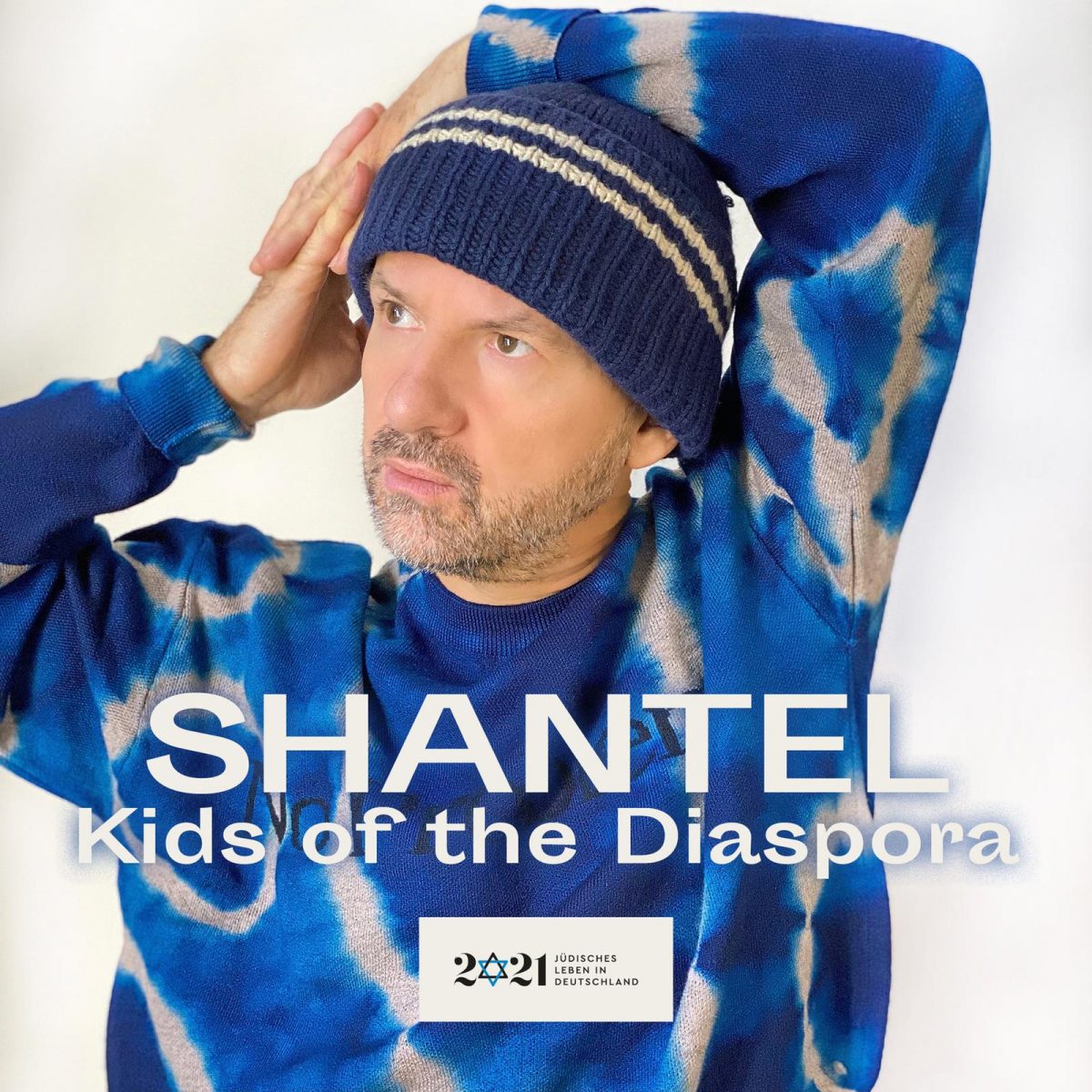 His music combines elements of Klezmer and Balkan beats. When Das Erste broadcast the 1700 Years of Jewish Life in Germany opening ceremony on Sunday at 4:30 PM, the audience was treated to a new song by Frankfurt musician Shantel.

Born Stefan Hantel, Shantel was asked by our society to to compose a piece for the Year of Celebration. “Kids of the Diaspora”, a track featuring an international group of artists, combines elements of Jewish and Southeast European musical traditions with the message: Cultures flow together, merge, and something new arises.

Shantel, who traces his roots to Bukovina in modern-day Ukraine, is the first German musician, according to his own estimation, to produce a music video in Israel – he has been performing in Israel regularly since the 1990s. We were able to ask him a few questions.

1. What is “Kids of the Diaspora” about?

“Waking up this morning and I say, yesterday was just another day. Looking at my life and I realize everything I had just went away” is my personal introduction in the song. They are words and rhymes that came to me through stories my grandmother told.

For many immigrants and refugees, flight, displacement, and destruction describe their sense of life. No matter what culture, religion, or skin color. It is a certain attitude toward life, sitting on packed bags.

1700 years of Jewish life in Germany also implicates a 2000-year-old story of suffering, especially in Germany. The Greek word diaspora means to scatter or disperse. Traditionally the word has a negative connotation and is associated with a great deal of suffering. It describes the loss of a people’s geographic or spiritual home. In my song, I seek to impart a positive connotation to the term diaspora – by employing the tools of pop culture in saying “Everybody is a superstar, we are the kids of the diaspora”.

2. How do you experience Jewish life in Germany?

Jewish Life in Germany has been undergoing a new and tangible renaissance since the 1990s. This has a lot to do with the younger generation of Jewish people in Germany developing a new sense of self for a number of reasons. On the one hand, there was a strong influx of people from former Soviet states. On the other hand, young Jews in Germany were able to redefine themselves differently than before. This new Jewish sense of self is interdisciplinary – spurred on by the arts and culture. I became aware of this as a musician for the first time when I began playing, remixing, rearranging, and writing Jewish songs and melodies at my Bucovina Club parties and concerts. Suddenly they weren’t the same old dusty Klezmer songs performed by some goy in a shtetl getup. They were up-to-snuff party hits and dance tracks that sparked the enthusiasm of a young, experimental, hedonistic, and cosmopolitan public, Jews and non-Jews alike.

3. How did the song come about?

I was experimenting for a long time. The task that I had undertaken was not an easy one. On the one hand, the song I wanted to compose should be danceable to a large audience. On the other hand, I wanted to do the subject justice. It was important to me to retain a sense of lightness. Puns and irony are a good and practical tool to give a song that certain universal touch. To me it is important that my song “Kids of the Diaspora” can be understood, listened to, and spread internationally. It is a universal touch, a humanist hymn.

4. What came first, the melody or the lyrics?

The melody was there first. That’s the advantage of making dance music. You need a melody first that also works rhythmically. I wanted a symbiosis of both. A more Western and electronically inspired beat that also works based on Eastern and Mediterranean melodies. I often like to blend tradition and modernity. I love the emotiveness of traditional music but don’t want to make folklore or world music. It is important to create something that has enough power and energy to hold up in the mainstream. But I am not willing to make compromises. The song needed a certain scent, a soul and, above all, authenticity. That was my top priority. My music originates in my local urban environment but includes a strong global component. There is nothing better for a musician than finding out that a song is listened to and understood the world over, even where the language is not spoken.

Andrei and I agreed from the start that we needed a universal hymn that works as a sing along. Andrei already knew this from my concerts. My song “Disko Partizani” is a good example of that.

5. What does the 1700 Years of Jewish Life in Germany Year of Celebration mean to you?

It is a great personal joy and honor to be a part of this Year of Celebration. Not only because my own family history has been formed by the turmoil of my biography. I just think it is important to make the Jewish experience in Germany come alive in a loud way – even beyond faith and spirituality. To me, it is a 2000-year-old story of migration that stands as an allegory for the degree to which a migrated culture can give a society a civilizing upgrade.

6. What do you hope for future of Jewish life in Germany?

Jewish life in Germany has been and is influential in making Germany the democratic nation of culture that we know today. Even if this story is characterized by suffering and persecution. Even if a latent anti-Semitic threat still exists in Germany today. It is the responsibility of this current generation to not hide, but instead to be loud and to view and use this positive, strong attitude as a relevant source of contrariness.

7. What has been on your mind lately?

I want to deconstruct the term “cultural minority” using the tools of the arts and music. To me, there is no minority within the realm of culture. There is only culture of people for people with diverse habits, no matter their origin, religion, or skin color. In Germany, people are still classified by differences in extraction, skin color, or religion. Let’s deconstruct this attitude. Let’s get rid of it! There should not be any marginalized groups. As a musician, all I can do is convey this message again and again and use the tools of music to tell my own story. You can also excite people about a new idea if you upgrade it’s emotional value and create a sensual experience. Music is great at that. And I feel very privileged to be spreading this message from Germany. Germany, a thriving land of immigration in Europe with 1700 years of Jewish history.